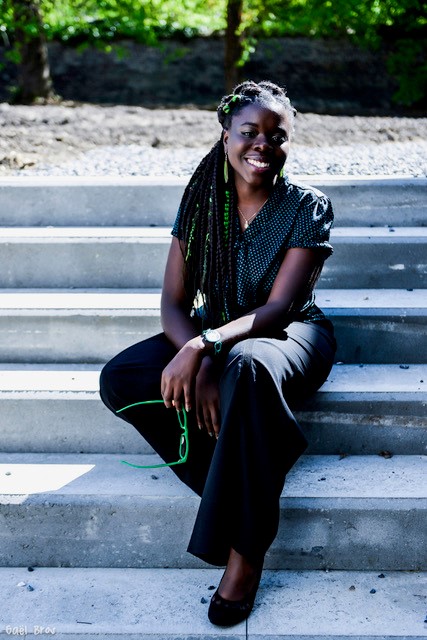 After studying Political Sciences at the University of Louvain (UCL), she continued her training in Classical Singing at the Institut supérieur de Musique Et de Pédagogie of Namur (IMEP). She graduated with high honours in 2014, in the class of Elise Gäbele, Ana Camelia Stefanecsu, Françoise Viatour and Benoît Giaux. In 2015, she joined the European Vocal Department where she continued her training in Lyric Art, notably with Patrick Leterme and Benoît Mernier. Then, she left for the United States, where she continued to improve herself by joining the vocal studio of Mrs. Marilyn Mims in West Palm Beach, Florida. She stayed there for five months and sung with the Palm Beach Opera. In Belgium, she is a member of the MMAcademy, a youth academy of the Théâtre Royal de La Monnaie in Brussels. In 2017, she became MMAcademy Laureate.

True to her passion, she has participated in numerous masterclasses with personalities such as Anna Caterina Antonacci, Karine Deshayes, José Van Dam, Alain Garichot, Angelika Kirchschlager, Malcom Martineau, Elena Pantrakova, Nora Gubisch, Alain Altinoglu, Georg Nigl, Sami Kustaloglu, Noëlle Barker, Margarida Natividade, Ludovic de San and Zeno Popescu. She is currently perfecting in Paris with dramatic soprano Christine Schweitzer. Raphaële has won several prizes in various vocal competitions in Belgium and abroad. In 2011, she won the third prize in the contest « Les Nouveaux Talents de l’Art Lyrique » of Ans, Belgium. She was First Prize and Public Prize at the Verviers « Prix Jacques Dôme » singing competition in 2012. In 2015, she won the First Prize, the Audience Prize and the « Summer Mosan » Special Prize in the International Competition Chant Bell’Arte in Braine-L’Alleud, Belgium. In the same year, she was also awarded at the International Festival of Anniviers Festival in Switzerland. In the United States, she won the First Prize at the Gold Coast Chapter NATS Auditions in Miami, Florida, and the Second Prize at the Southeastern United States Regional Auditions in Deland, Florida. Back in Belgium, she won the First Prize at the International Music Competition « Triompe de l’Art » in Brussels, and the Klassiek Centraal award.

Raphaële loves the art of singing and its different styles. She sings with both ancient and contemporary musical ensembles. She just recorded the title role Maria de Buenos Aires of Piazzolla, with the Z V E Z D O L I K I ensemble. She is particularly fond of opera. Over the last few years, she had the opportunity to appear on the stage of the Théâtre Royal de la Monnaie, the Opera Royal de Wallonie, the Flemish Opera in Belgium, and Palm Beach Opera in Florida. Raphaële performed Carmen (Carmen by Bizet), Prince Charmant (Cendrillon by Massenet), Zefka (The Diary of One who disappeared by Janacek), Metella (La Vie Parisienne by Offenbach), Mrs. Baggott (The Little Sweep by Britten), Mother Jeanne of the Holy Child Jesus (Dialogues des Carmélites by Poulenc), an Edelknabe (Lohengrin of Wagner). She had the chance to work with renowned conductors such as Alain Altinoglu, Bassem Akiki, Evelino Pido, David Stern, Antonio Fogliani and Guy Van Waas, and directors such as Ivo Van Hove, Damiano Michieletto, Olivier Py, John de los Santos, Michael De Cock and Junior Mthombeni. Raphaële is currently playing Antonia, in the musical Man of La Mancha, a collaboration between La Monnaie and the Royal Flemish Theater (KVS) in Brussels. With this production, she will go on tour in Belgium and abroad during this season and the next one. She will also be reunited with colleagues from the Diary of One who disappeared in China, the Czech Republic, Italy, the United States and the United Kingdom.