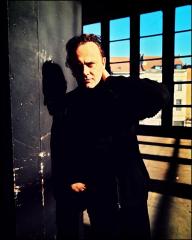 Eric Sleichim (1958) studied at the conservatories of Brussels and Liege. In the ‘80s he co-founded with Thierry De Mey, Peter Vermeersch and Walter Hus the group ‘Maximalist!’, that provided music for the first productions of Anne Teresa de Keersmaeker and Wim Vandekeybus .

In 1988 Eric Sleichim founded BL!NDMAN a saxophone quartet with a traditional line-up that developed new playing techniques and immensely expanded the repertoire for the saxophone quartet by continuously exploring the interfaces with other art disciplines.

The name BL!NDMAN refers to the magazine “The Blind Man”, edited by Marcel Duchamp in 1917 in New York. This title is based on the Dadaist idea of a blind guide that leads the public through exhibitions. The exclamation mark in the name refers to Maximalist!

As a composer-saxophone player, Sleichim acquired international repute by the extremely idiosyncratic way in which he plays the instrument: he makes use of squealing springs, sounds of keys, pop and smack-noises as well of the tonal qualities of the saxophone. Sleichim turns what is traditionally considered a side effect into a main focus thus creating, often in combination with other art forms, soundscapes that were never heard before. Since 1988 he performs regularly in Belgium and abroad. He’s regularly giving workshops on non-conventional techniques.

At the beginning of his career he composed ‘Visting the Sound’ (1985) for the Flanders Festival, ‘Chambre d’amis’ (1986) for brass quintet commissioned by Jan Hoet and laMonnaie, ‘Five Movements’ (1988) for the Festival De Stoute Jaren. In the ’90s he composes ‘Poortenbos’ (1989) for saxophone quartet and releases a CD on the Brussels label Sub Rosa, ‘Motus’ (1991) for muted saxophone quartet, ‘Verwicklungen/Les Anamorphes’ (1992) for Documenta IX, ‘Aleatoric Variations 1 & 2’ (1995-96) based on aleatoric elements and ‘Extra citates/Ex-citations’ (1996) for the prestigious Victor Horta-exhibition.

In his oeuvre, Eric Sleichim prefers to connects to other disciplines. As a young composer he wrote music for theatre performances of Michael Matthews and Het Onafhankelijk Toneel (1986/87). Ten years later he picked up the thread again and collaborated with Guy Cassiers on ‘De Sleutel’ (The Key) (1998) and ‘La grande Suite’ for the Ro Theater. For Ivo van Hove and Toneelgroep Amsterdam he wrote the music for the 6 hour Shakespeare marathon performance ‘Roman Tragedies’ (2007) and for the theatre adaptation of ‘Teorema’ by Pier Paolo Pasolini (2009).

For Jan Fabre he developed the electro-acoustic score ‘The Angel of Death’ which he performed live and he wrote the music for ‘L’histoire de Larmes’, the opening production of the Avignon Festival in 2005.

Fabre at his turn wrote the original text of Sleichim’s music theatre piece ‘Men in Tribulation’ (2004) about Antonin Artaud, coproduced by the KunstenFestivalDesArts and the HollandFestival. This is the first part of the ‘Trilogy of tragic Fates’ that Sleichim is developing as a house composer for Muziektheater Transparant. In the second part ‘Intra Muros’ (2007), Pier Paolo Pasolini was the central character on a text by Peter Verhelst with a scenography by Jan Versweyveld. The third part ‘Stills’ will be inspired on the writer Sylvia Plath (2013).

At the turn of the 21st century, Eric Sleichim concentrates on ancient music in his search for unreclaimed possibilities for the saxophone. In 1999 he arranged Bach’s Choral Partitas for organ into a renewing score for saxophones. ‘BL!NDMAN plays Bach’ became a success. Subsequently he arranged polyphonic pieces from the 12th until the 17th century for the program ‘Multiple Voice’ in which the saxophone quartet multiplies itself to 36 voices by means of a delay-system. Then in ‘Chromatic Variations’ he combined the saxophone quartet with a countertenor for his arrangements of chromatic motets. In 2003 he collaborated with Paul Van Nevel on a program for BL!NDMAN and Huelgas.

Electronics started to gain an ever more prominent place in Sleichim’s compositions. Use of delay and real-time deformations generate a new dimension in the soundspectrum of the saxophone. The beginning of the new millennium is characterised by different commissions for extended line-ups. In 2001 Sleichim conceived ‘BL!NDMAN ELECTR!C’, a program that focuses on electronic manipulation of live music, developed in close collaboration with Heiner Goebbels and Helmut Oehring. He wrote the electro-acoustic piece ‘Gestimmtseit’ for BL!NDMAN and the Mondrian String Quartet (2004) and ‘Carnyx’ for large ensemble, a commission by Ars Musica. Since 2006, Sleichim is composer in residence at Le Grame in Lyon. The centre supported a.o. compositions such as ‘Isotropes’ for Collegium Vocale and BL!NDMAN, that has been premiered at the prestigious festival in Saintes (2006). For BL!NDMAN [sax] + [vox] he composed the “Mass 4 Turntables” (MA-festival 2008) and for Champ d’Action ‘Ruisveld’ in which turntables are used as a starting point. (deSingel 2008).

'Poortenbos' (1992) a suite for saxophone-quartet, ‘Dust Makes Damage’ (1998) an anthology of contemporary music played by BL!NDMAN during 10 years. Sleichim can also be heard with Steve Lacy a.o. on the CD ‘Antonyms’ (1994), with Ictus on the CD’s ‘Terry Riley/In C’ and ‘David Shea with Ictus’ and on ‘Thierry De Mey/UNDO’.

Universal Music released 4 cd’s by BL!NDMAN with music, arrangements and concepts of Sleichim: ‘BL!NDMAN plays Bach’ (2000) , the transcriptions of Bach’s early Choral Partitas have been released worldwide, ‘Multiple Voice’ (2002), the polyphonic works from the 12 until 16th century played on saxophone were rewarded the Klara Muziekprijs 2003 for the best Belgian production, ‘MAX!MAL BL!NDMAN’ (2004) never before recorded pieces by the legendary ensemble ‘Maximal!st’, performed by BL!NDMAN added with piano’s, cello and percussion, and ‘Mozart Machine’ (2006) in which Sleichim released Mozart’s canons with dirty texts and arranged them for female voices and saxophones.

In 2007 Eric Sleichim was curator of Music@venture at deSingel and Amuz. In his program, with only music by living composers, he focused mainly on electronics, other forms of art and young musicians.

In 2009 he created the scores for silent movies ‘Secrets of a Soul’ and ‘Combat de boxe’ and he collaborated with Ivo van Hove and Toneelgroep Amsterdam for the Ruhrtriennale on ‘Teorema’ by Pasolini.

He wrote a new piece ‘Unter den Hämmern' for Marcus Weiss (sax) and Yukiko Sugawara (piano), commissioned by the Transit-festival 09.

For 2010 he creates Kwadratur#2/Transfo: a performance for the complete BL!NDMAN collective and collaborates with composer and dj Matt Wright (UK) and video-artist Olga Mink (NL) to make "Totem", a production for 8 turntables and video-environment.

In 2011 Eric Sleichim conceives "Utopia :: 47 - a very last Passion", a commission of the MA-Festival (Bruges) and Klarafestival (Brussels) and a collaboration with Transparant.

As from the opening of the MAS, Eric Sleichim is composer in residence of the new museum in Antwerp.