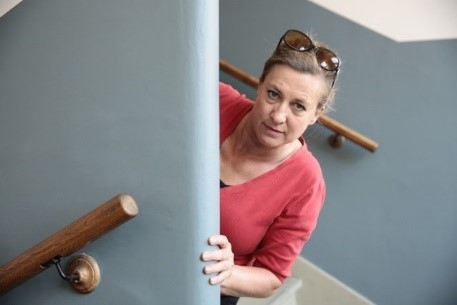 Ineke Nijssen (1960) graduated from the Toneelacademie in Maastricht in 1984. She acted at Eva Bal’s Speeltheater for several years, and there met Eric De Volder. For about fifteen years she was one of the core members of his company Toneelgroep Ceremonia, performing in such pieces as Diep in het Bos, Regent en Regentes and Achter het Eten. Nijssen also became familiar as a television performer, for example in Mark Uytterhoeven’s programme Onvoorziene Omstandigheden and Patrice Toye’s film Little Black Spiders. In addition, she directs Kommil Foo and other performers, coaches young theatre-makers and teaches on several theatre courses.